A short clip of a politician criticising Narendra Modi in a House is circulating on social media with the claim that the Prime Minister has been the subject of discussion in the Nepal Parliament. India Today's AFWA probes the truth.

A short clip of a politician criticising Narendra Modi in a House is circulating on social media with the claim that the Prime Minister has been the subject of discussion in the Nepal Parliament.

In the 2-minute-20-second video, the man is heard criticising Modi on his foreign visits, demonetisation, economy, petrol prices, as well as the amount spent during former United States President Donald Trump’s visit to India.

The caption in Hindi along with the video translates to, “Discussions on Modi ji in Nepal Parliament. Now some people will say they have no right to talk about our country. But after hearing the truth, I am ashamed.”

Similar claims are also viral on Facebook. The archived versions can be seen here, here and here.

With the help of keyword search, we found the same video uploaded on the official Facebook page of Himachal Pradesh Congress unit on March 21. According to the video description, the man seen criticising Modi is Congress MLA Jagat Singh Negi.

The video description in Hindi translates to, “Hear from Kinnaur Congress MLA Jagat Singh Negi about the Prime Minister of the country”.

We also found a longer version of the same video uploaded on the YouTube channel of “Hindustan Live”.

The same clip was also shared by Negi on his Facebook page on March 18 as a video from the Budget session. Negi is a two-time MLA from Kinnaur and also the former Deputy Speaker of Himachal Pradesh assembly.

It is to also note that in the viral video, Negi, along with other legislators, are wearing “Bushehri”, the traditional Himachali headgear that announces one’s political affiliation. The colour of the band covering half the circumference of the cap is green, considered as the colour of Congress. For BJP, the colour is maroon.

Hence, it is clear that the video in question is from Himachal Pradesh and has nothing to do with the Nepal Parliament.

READ | Fact Check: This article praising PM Modi was not published by ‘The New York Times’

READ | Fact Check: No, this picture of Narendra Modi is not with the staff of Prime Minister’s Office 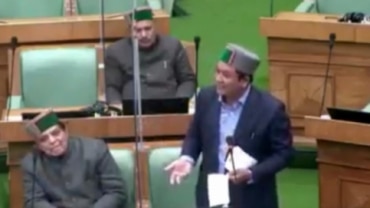